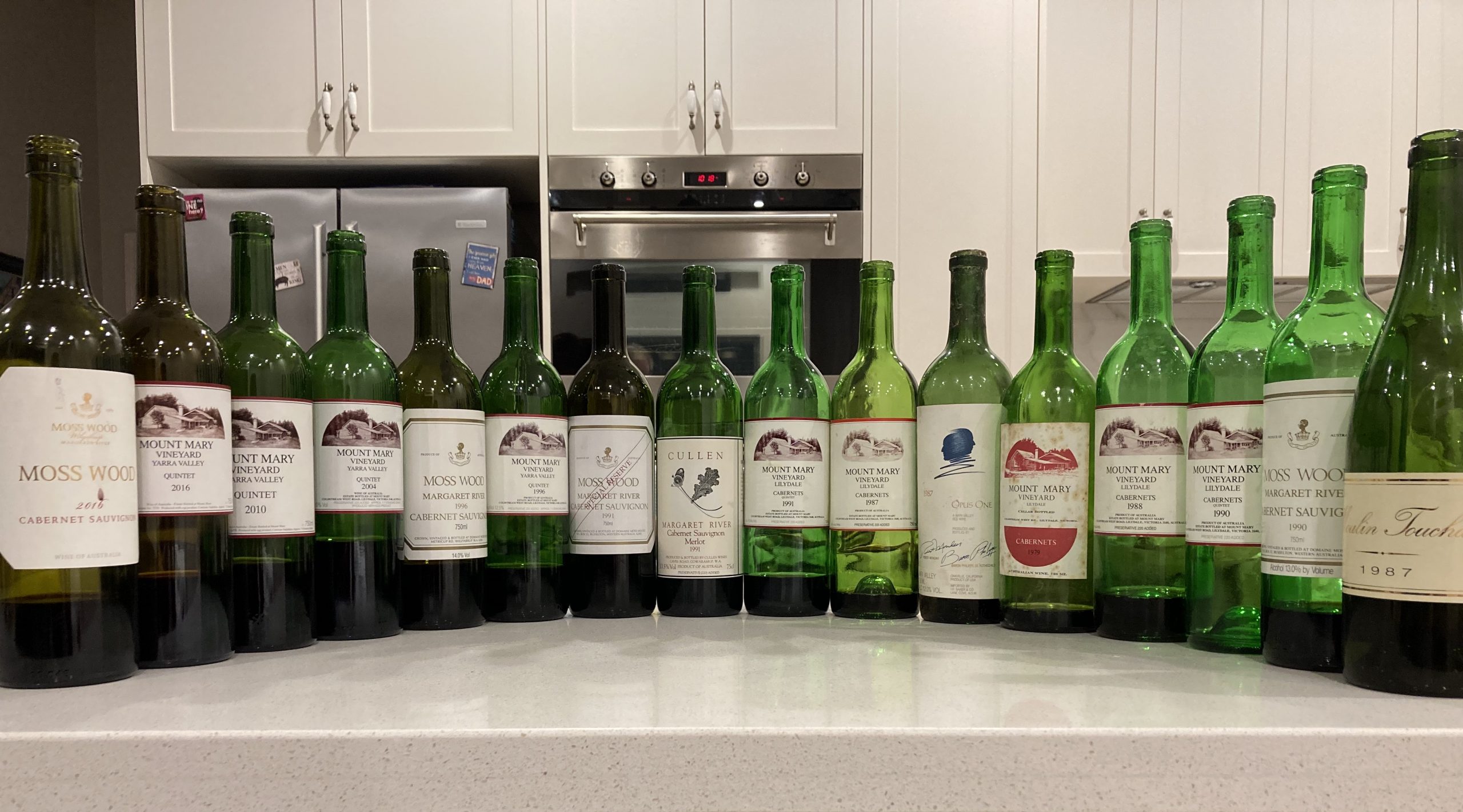 Well I can say for certainty, this isn’t a common tasting to be invited too… and what a privilege it was.  I worked hard to assimilate some kind of cohesion on my notebook, but we are all very lucky I applied myself as well as I did, because the wines were distracting to say the least.  The notes below are as I wrote them last night.  I have been honest in my guesses – both right and wrong – and have recorded closures and points.

The host, Bob, had worked with Sam Middleton (Mount Mary) over the past couple of weeks to single out the best vintages to show on the evening, and Bob then matched to them, to some (very) interesting Western Australian and American examples, for context.

All wines purchased on release and stored in a subterranean temperature-controlled cellar from purchase.  Served blind, in brackets of two, except where stated.

The nose here is plush, succulent and restrained.  Talk about classy.  The tannins are chewy and supple, it has a willowy, lithe form about it.   Raspberry, red licorice and pomegrant overlaid by cassis and bramble.  Jasmine tea, too.  Big yes.

Creamy and fine.  That cohesion that I found so present in the wine prior is present here, too.  While this is hard to distinguish from modern BDX, there is a giveaway vibrancy and glossiness nestled into the core of red fruit that outs it as new world. The fine tannins are telltale too. For the power and glory are yours…. This is MM.

Fresh leather strapping, cigar box, black tea – this has elegance and refinement to spare – it is all about clarity and finesse, creamy and silky.  The layers of spice that straddle the ure fruit are nothing short of astounding… and I am led by the nose to BDX.  For sheer length and persistence…. Wow.

Salted licorise, anise, hints of fennel and five spice.  All of this is plumped/supported/propelled/encouraged by succulent red fruit.  The texture is fine, silky… bouncy still.  Chewy.  Incredible length of flavour like a forge over the tongue.  Teetering on the brink of old and new… a seesaw of pleasure.  Mmm.

Much older and finer, far more translucent in colour.  The flavour intensity is superb, although it is now moving into elegant, aged claret territory.  It is succulent. It is all restraint without a powerful/loud engine behind it, although it is VERY long… Fine.  Elegant.  Pretty.  Unencumbered.  Immaculate condition and tasted in isolation: glorious.  The breathing space here is refreshing.

Guessed: WA Cabernet dominant.  This was loved across the table.

The next bracket was served as a three.  I guessed Mount Mary, Moss Wood, Moss Wood Reserve

Spicy and fine, I’m going with oriental here…red currant and pomegranate, Chinese five spice, star anise and Szechuan.  Clarity and willowy perfection abounds.  This is held in a vacuum. Stasis. Suspended in time.  Of the bracket, this is the most youthful.

A very interesting nose here, jamon and prosciutto, salted heirloom tomato.  The palate has spunk, energy and resolve – this is powerful and structured.  Great length of flavour.  From a different place.  Margaret River?

Guessed: Margaret River Cabernet (sp. Moss Wood.  Of COURSE this is Cullen.  Every tasting note I make, blind or no, I comment on energy and life in Cullen wines… should have just re-read what I wrote when making my prediction.)

Similar hallmarks of meat and spice on the nose, although more pronounced here.  Perhaps this is not in as good condition…? However, unassailable length.  Minerality and balance on the midpalate through finish.  A real cocoa nib character on the nose… for the rest of the table, this was joint wine of the bracket.

The following three wines were served as a bracket.  We were given no clues as to age, excepting that two shared a vintage.

Guessed: No idea.  Loved it.

This is finer and lighter in the glass than anything that has come before it, and carrying fine sediment, too. This has a distinct, creamy, patisserie nose – think fresh croissants on a Saturday morning.  It’s hopping great.  Jeez.  Creamy (there it is again), rich, salty.  Baked/roasted red currant.  Gorgeous.  Elegance.

Guessed: Out at sea without an idea.  Loved it though.

God what a nose.  Creamy patisserie, that same croissant character.  A suggestion of cooling minerality on the midpalate, but this is salty and red.  Still primary, some heat suggesting sunshine and warmth in the vineyard (although of this I have no idea). Ripe, chewy and unbelievable endurance across the palate and into the finish.

Vibrant and bright, again with the mineral edge just rearing its head past the front palate…. Very elegant, very fine, but structured and ripe nonetheless.  This is impressive.

Guessed: Tossing up between Mount Mary and Bordeaux

Here is barnyard. Steed, dried straw, leather, spice, sunshine at dawn and dew on the grass.  This inspires and enlightens and by F its good.  Length.  Persistence. Endurance.  Wow.

Totally sweet and unctuous, with a pert icing sugar sweetness nestled in on the midpalate.  Through the finish there is white spice and it is toasty, too.  Utterly exciting, but also unusual…

Guessed: Bob said he was reminded of this one by me.  I couldn’t for the life of me think how.  I guessed possibly Petit Manseng from Jurancon or… Old Vin de Constance?  I was stabbing in the dark, if that’s not obvious.